CCR President in a visit to Russia, despite that Ministry of Foreign Affairs has recommended not to make this visit 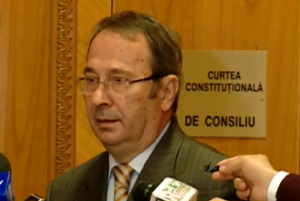 CCR President Valer Dorneanu is in Russia today, where he attends the Sankt Petersburg International Legal Forum, despite that MAE has recommended not to make the visit.

The presence of CCR head in Russia is not announced on the institution’s website but has been confirmed for Digi24.ro by the very person concerned.

„The visit to Russia answers the invitation from the Constitutional Court of the Russian Federation on the occasion of the 25th anniversary of its establishment and St. Petersburg International Legal Forum,” Valer Dorneanu said and added that his counterpart „participated last year at CCR’s similar anniversary”.

According to Digi24.ro sources, the Ministry of Foreign Affairs in Bucharest recommended that the head of CCR should not go to Russia, a fact also acknowledged by Valer Dorneanu.

But, „When MAE’s recommendation has been received, the visit had already been arranged and flight tickets already purchased.”

Valer Dorneanu added that „after receiving this recommendation, I consulted MAE and the issues have been clarified.”

However, according to Digi24.ro sources, „the issue has not been clarified”, not even later, neither was there a final agreement to contradict the initial recommendation.

Valer Dorneanu’s visit to Russia takes place at a time of maximum internal sensitivity, given that the decisions CCR is expected to make in the next period depend on the stability of the entire judiciary, and the context is also marked by strong tensions on the political scene.

On May 30, the Constitutional Court resumed discussions on the referral regarding the Government’s complaint against President Klaus Iohannis for failing to revoke the head of DNA, Laura Codruta Kovesi, after such a proposal had been submitted to Cotroceni by the Minister of Justice, Tudorel Toader.

In fact, the head of state has sent to the Constitutional Court no less than 15 complaints from the beginning of the year until now.