Romania imported an amount of electricity of almost 796 GWh in the first month of this year, by more than 36% above what it exported… END_OF_DOCUMENT_TOKEN_TO_BE_REPLACED

GFG Alliance has committed to invest one billion euros to upgrade Galati steel plant in order to reduce emissions and increase production. Another EUR 1… END_OF_DOCUMENT_TOKEN_TO_BE_REPLACED

The transition to a green economy needs to be supported by new, additional European funds, distinct from Romania’s allocations from the future EU multiannual budget.… END_OF_DOCUMENT_TOKEN_TO_BE_REPLACED

Romania fell 3 places to the 10th position in the ranking of largest investments made by the European Bank for Reconstruction and Development (EBRD), after… END_OF_DOCUMENT_TOKEN_TO_BE_REPLACED

The Transport Ministry, as the Intermediate Body in Transport, approved the financing request for the project “Construction of Sibiu – Pitesti highway”, Sections 1, 4… END_OF_DOCUMENT_TOKEN_TO_BE_REPLACED

BNR: If we sold foreign currency to defend Romanian leu, as PSD wants, interest rates would explode and ROBOR would go over 5-7 percentage points 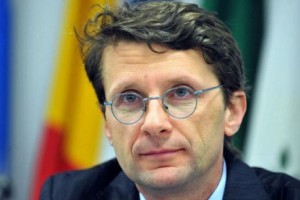 The National Bank of Romania wants a “loyal cooperation” with the Ministry of Public Finance, and that involves a prior consultation with the central bank when taking decisions that affect the monetary policy and financial stability of the country, according to a press statement made by BNR spokesperson, Dan Suciu (foto).

OUG 114 (the so-called Ordinance on Greed), which requires banks to pay an asset tax related to ROBOR level and overtaxes energy and telecommunications companies, will be analysed on February 7 at this year’s first meeting of the National Committee for Macro-prudential Supervision, which will be attended by BNR Governor Mugur Isarescu and Minister of Finance Eugen Teodorovici.

“The National Bank of Romania is permanently involved, especially during these days, in establishing and implementing the monetary policy and exchange rate policy in the context given by internal and international factors. In this context, the BNR wants the same as in the past, “loyal cooperation with the Ministry of Public Finance for harmonizing fiscal and monetary policies, for the benefit of citizens and the business environment”. Such cooperation requires a prior consultation with the BNR when decisions that affect the central bank’s monetary policy and the country’s financial stability are made,” Dan Suciu says.

On Thursday, PSD asked the BNR to do its job and defend the national currency and said the central bank has enough resources to do so.

On Friday, the Finance Ministry drew attention to the need for the central bank to establish and supervise the compliance with the currency regime. In addition, the ministry stressed that “the Government wants a loyal cooperation” with the central bank.

BNR announced on Friday a benchmark exchange rate of 4.7648 RON. The market is at a stage when is looking for a new balance level, as it is affected by the lack of credibility induced by recent legislative measures, including OUG 114/2018.

“There has been a lack of credibility among investors owning RON and starting to give up their RON holdings, hence the pressure created. RON is ultimately a convertible currency, it is traded on a large market, not only in Romania, therefore the credibility of the local situation is extremely important in setting the expectations,” said Dan Suciu, quoted by Mediafax.

ROBOR could exceed 5% if the BNR intervened in the market with the aim of strengthening RON by selling Euro reserves, as requested by PSD, explained Adrian Vasilescu at Antena 3.

“The BNR is looking at this recommendation; it has EUR 36 billion, so that’s what PSD recommends, namely to solve the problem with these reserves. How the BNR can use the reserve in this situation (…) So, we come with foreign currency in the market, we take the RON amounts from investors because investors who have now RON would like to get rid of them because this is happening on the international market, they want to get rid of the Romanian securities, change them into foreign currency (…) Well, if the National Bank would bring too much amount in foreign currency these days when the international market is putting pressure on the domestic market, what would happen? The foreign currency would be in excess, investors’ RON amounts in the market would be in deficit, the interest would rise, and ROBOR would go over 5 or over 6 or over 7. The intervention on the foreign exchange market is like brain surgery. You cannot make surgery on the brain without thinking about the consequences,” Adrian Vasilescu said.

Romania imported an amount of electricity of almost 796 GWh in the first month of this year, by more than 36% above what it exported… END_OF_DOCUMENT_TOKEN_TO_BE_REPLACED

GFG Alliance has committed to invest one billion euros to upgrade Galati steel plant in order to reduce emissions and increase production. Another EUR 1… END_OF_DOCUMENT_TOKEN_TO_BE_REPLACED

The Transport Ministry, as the Intermediate Body in Transport, approved the financing request for the project "Construction of Sibiu - Pitesti highway", Sections 1, 4… END_OF_DOCUMENT_TOKEN_TO_BE_REPLACED

Lack of trust in authorities, corruption and low living standards are the main reasons why young people leave Romania. The data is part of a… END_OF_DOCUMENT_TOKEN_TO_BE_REPLACED

Romania is the EU country with the fewest cars in terms of the number of inhabitants, according to data recently published by Eurostat. We appear… END_OF_DOCUMENT_TOKEN_TO_BE_REPLACED

The Government is preparing the public for the first measures aimed at avoiding the budget slippage, which would be applied by the PSD-ALDE government. News… END_OF_DOCUMENT_TOKEN_TO_BE_REPLACED

French Prosecutor Jean-Francois Bohnert will be appointed as head of the European Financial Prosecutor's Office, a position for which he was heard on Thursday, 11… END_OF_DOCUMENT_TOKEN_TO_BE_REPLACED

Romania recorded the highest road deaths in the EU also last year, with 96 deaths per one million inhabitants in 2018, almost double the EU… END_OF_DOCUMENT_TOKEN_TO_BE_REPLACED

Sorina Pintea announced on Thursday further new changes that will be brought to the functioning of the health care system, including new rules for employment… END_OF_DOCUMENT_TOKEN_TO_BE_REPLACED

The new order on approval and selection procedures for insolvency practitioners is an important step to a very good direction, industry experts say. ANAF is… END_OF_DOCUMENT_TOKEN_TO_BE_REPLACED

Romania lost to Estonia in the final vote to get the non-permanent member position within the UN Security Council for the period 2020-2021. On Friday,… END_OF_DOCUMENT_TOKEN_TO_BE_REPLACED

eMAG hopes to get the opinion of the Hungarian Competition Council over the next two months for the acquisition of Extreme Digital, the market leader… END_OF_DOCUMENT_TOKEN_TO_BE_REPLACED