The yield of long-term Romanian government bonds was 4.28% in January 2020, according to Eurostat data. That is well above all the other states of… END_OF_DOCUMENT_TOKEN_TO_BE_REPLACED

Net subscriptions in Romanian mutual funds (the difference between invested and withdrawn amounts) became again positive in 2019 after they had been negative in 2018.… END_OF_DOCUMENT_TOKEN_TO_BE_REPLACED

Romgaz (SNG) announced the start of production in the deep area of Caragele deposit (Buzau), the biggest discovered in the last 30 years and one… END_OF_DOCUMENT_TOKEN_TO_BE_REPLACED

Romania managed again to stand out at the EU level by recording the highest level of the public deficit in the third quarter of 2019,… END_OF_DOCUMENT_TOKEN_TO_BE_REPLACED

BNR analysis: Radiography of investments in Romania – under what conditions capital accumulation occurs 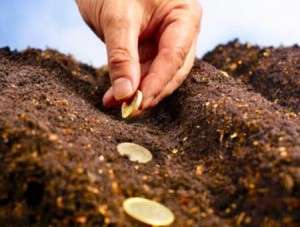 Foreign direct investment (FDI) and expectations regarding the demand have a positive influence on capital accumulation in Romania, while uncertainties play an inhibiting role, especially on investments planned by small and medium or young companies.

In the case of large firms, large debts are generally those impeding investments.

Romania’s weak performance in attracting FDI is also the main explanation for the lower level of fixed capital gross formation compared to that recorded by the states in the region, according to a National Bank of Romania (BNR) analysis.

The resumption of economic growth and the recovery of demand since 2014 have led to an improvement in terms of investment. However, they are still below those of 2008.

The sectors that enjoyed the most significant investments in the period 2014-2017 were constructions, agriculture and manufacturing sectors but also the trade sector, while other domains had “a less convincing performance, and food industry is a notable example” as mentioned in a chart designed to analyse the evolution of investments, from the Inflation Report which BNR published on Monday. 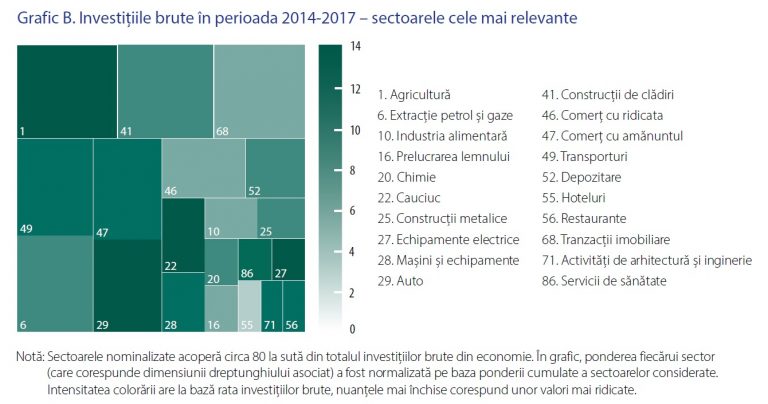 Chart B. Gross investments between 2014-2017 – most relevant sectors

Note: listed sectors cover about 80% of the total gross investment. In this chart, the share that each sector has (corresponding to the related rectangle dimensions) has been listed based on the total share of sectors under review. Colour intensity is based on gross investment rate and darker shades correspond to higher values.

The agricultural sector benefited from robust investments, driven by the absorption of European funds, as well as the presence at the local level of some important international operators, which targeted the improvement of their logistic capacity. Between 2014 and 2017, about 9 percentage points of the fixed capital gross formation in the economy came from this sector.

There are, however, industries where demand for growth and confidence in the economy has not led to an investment increase and the example noticed was the food industry, which accounts for about 10% of Romania’s industrial output.

“In spite of the space created by significant fiscal stimuli (including the measure addressed directly to the segment, of extending the reduced VAT rate to all food products in June 2015), it recorded a modest investment rate increase (1-2 percentage points) up to about 5 percentage points on average per year in 2016-2017 in gross investments, 1.4 percentage points in net investments,” as showed in the central bank’s analysis.

In 2017, the trade sector reached approximately 16% of domestic investments.

“Differences in investment activity levels between food and trade sectors, both beneficiaries of a favourable demand context in recent years, ultimately illustrate the effect of a precarious competitive position of the first field mentioned. The erosion of competitiveness went against the presence of foreign investors and a firmer acceleration in revenue dynamics, reflected further in an investment activity less alert than expected, which does not provide a solid ground for a sector recovery over the next period”, explains BNR analysts.

How investment decisions are made

BNR analysis highlights the importance of companies’ expectations on demand evolution in starting the investment process.

If a company foresees favourable conditions in the next period, the probability for this company to be positioned in the capital accumulation regime increases by 4.3 percentage points in the case of gross investments (2.5 pp. in the case of net investment).

On the other hand, an uncertainty increase in the economy fades the investment momentum. A more volatile economic cycle affects particularly small and medium-sized firms. In the case of large firms, the effect of uncertainty is narrower and a possible explanation is that they have the ability to formulate more precise forecasts despite a wide variation in the expectations range.

At the same time, “investments of young firms seem to be more exposed to the uncertainty intensification, while the effect is even opposite for operators with at least 13 years of activity – probably, as a result of the accumulated experience, they are better able to exploit investment opportunities created in an uncertain environment,” reads the document

At the same time, the chance of (net) investment expands with the size of the firm (large ones have a probability of about 25 pp. higher compared to micro firms), and engaging in external operations encourages capital accumulations (about 2 pp. higher probability on average).

Foreign direct investment in the sector is also relevant for encouraging fixed capital gross formation. This is best illustrated by the evolution of investments in food and trade industry, respectively.

In 2017, the share of FDI stock in the gross capital stock in retail was USD 42, compared to only 23% in the food industry. The lack of competition has discouraged investments in the food industry and foreign companies limited themselves to capturing “benefits from the demand advance only by exports to the domestic economy”, not also by investing in the sector.

For example, in 2015, the profitability related to assets was almost 8 percentage points in Romania, while it was slightly lower in Hungary, the Czech Republic and Poland.

Instead, the size of companies (by staff) seems to create a slight advantage for Czech and Polish investments. In the Czech Republic, in 2015, a company had an average of 42 employees, in Poland – 44, while in Romania only 38, and in Hungary – 37.

“Local economy is less favourably positioned from the perspective of corporate indebtedness, which, despite the downward trend observed, is generally above the values in the other three states (which at the same time suggests a too low level of equity), but also from the perspective of foreign direct investments and the Czech Republic, Poland or Hungary are seen as more attractive destinations,” the survey shows..

GFG Alliance has committed to invest one billion euros to upgrade Galati steel plant in order to reduce emissions and increase production. Another EUR 1… END_OF_DOCUMENT_TOKEN_TO_BE_REPLACED

The Transport Ministry, as the Intermediate Body in Transport, approved the financing request for the project "Construction of Sibiu - Pitesti highway", Sections 1, 4… END_OF_DOCUMENT_TOKEN_TO_BE_REPLACED

Lack of trust in authorities, corruption and low living standards are the main reasons why young people leave Romania. The data is part of a… END_OF_DOCUMENT_TOKEN_TO_BE_REPLACED

Romania is the EU country with the fewest cars in terms of the number of inhabitants, according to data recently published by Eurostat. We appear… END_OF_DOCUMENT_TOKEN_TO_BE_REPLACED

The Government is preparing the public for the first measures aimed at avoiding the budget slippage, which would be applied by the PSD-ALDE government. News… END_OF_DOCUMENT_TOKEN_TO_BE_REPLACED

French Prosecutor Jean-Francois Bohnert will be appointed as head of the European Financial Prosecutor's Office, a position for which he was heard on Thursday, 11… END_OF_DOCUMENT_TOKEN_TO_BE_REPLACED

Romania recorded the highest road deaths in the EU also last year, with 96 deaths per one million inhabitants in 2018, almost double the EU… END_OF_DOCUMENT_TOKEN_TO_BE_REPLACED

Sorina Pintea announced on Thursday further new changes that will be brought to the functioning of the health care system, including new rules for employment… END_OF_DOCUMENT_TOKEN_TO_BE_REPLACED

The new order on approval and selection procedures for insolvency practitioners is an important step to a very good direction, industry experts say. ANAF is… END_OF_DOCUMENT_TOKEN_TO_BE_REPLACED

Romania lost to Estonia in the final vote to get the non-permanent member position within the UN Security Council for the period 2020-2021. On Friday,… END_OF_DOCUMENT_TOKEN_TO_BE_REPLACED

eMAG hopes to get the opinion of the Hungarian Competition Council over the next two months for the acquisition of Extreme Digital, the market leader… END_OF_DOCUMENT_TOKEN_TO_BE_REPLACED