ANAF changes philosophy of fight against evasion: it is working on legislation to simplify investigations 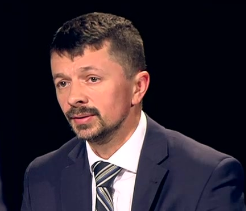 „In two years we will have a new ANAF in terms of services provided to taxpayers,” said Dragos Doros (photo), ANAF’s President on Tuesday, who attended the annual Deloitte conference on topics related to taxation.

Dragos Doros detailed a series of plans and projects of the institution which will run by that time, announcing as an example that ANAF is in advanced discussions with the Ministry of Justice to amend the legislation which sanctions tax evasion, in order to allow „an easier investigation of this crime.”

The new philosophy of the fight against tax evasion: we want to follow the money, not the documents

ANAF’s President expressed in front of the participants at the Deloitte conference his hope that his institution will have by the end of the year a new legislative framework allowing „a reduction of the criminal complaints inventory and a much better money recovery.”

Dragos Doros explained: „Current legislation requires for the inspectors to press criminal charges when they have the slightest suspicion of tax evasion. The result is that we have registered very many criminal complaints, many of which are not active. During this time, civil actions to recover the damages are suspended. We are looking at the costs of these criminal complaints for the state and how much we recover. We change the laws and other procedures, with the aim to create an easier procedure in which to follow the money, not the fraudsters’ documents. We want to be more efficient.”

From control to abuse and back: taxpayer’s version

On the same topic of „efficiency”, Dragos Doros said that the Antifraud Directorate made 3% more controls and charged 30% more fines, compared to the same period of last year.

ANAF’s President admitted that the work of this department started with „some inconveniences„.

„Were there abuses as well? Yes, this might be natural, as for any start. We have tried though to correct these abuses, we have been open to dialogue and feedback. I am confident that abuses have decreased compared to the past,” says Dragos Doros.

In support of this assertion, ANAF’s President provided the following statistics:

The abuses problem looks different from the taxpayer’s standpoint:

ANAF’s President also announced on Tuesday the concept of „horizontal monitoring” which will be launched this year with a pilot project. This pilot project will run for companies that voluntarily join the program and will be directly connected to the tax authority, as they will be basically subject of a continuous „control”.

According to the Dragos Doros, the tax authority will observe in real-time the changes made in the company’s accounting records and instantly send any comments related to these operations so that companies benefit from expert advice in real time.

Another novelty is the imminent change of classification criteria for the large taxpayers. Current legislation uses criteria for placing in this category related to the turnover of a certain taxpayer identification number.

The novelty refers to the groups of companies that also own smaller economic entities. „We have to see them all as a group,” says Dragos Doros.

ANAF’s chief warned that, although there are several documents on the institution’s web-site that can be filled in and submitted electronically, companies continue to submit these declarations physically.

„After January 1, we will not accept these statements on paper any longer,” warned Dragos Doros, who said that the institution also takes steps so that „the electronic signature to become more accessible.”

Regarding the computerization, Dragos Doros said that the institution also tries to solve the communication problems with the taxpayer.

The famous unit from Ramnicu Valcea that today automatically issues taxation decisions that taxpayers receive by post will be replaced by electronic communication.

„In 1-3 months we will open 1 million email accounts that will be activated based on the electronic signature and this will be the standard mode of communication. We have already started with large taxpayers, but we want to secure this dialogue, to also stipulate the procedure in the law and to extend it as much as we can,” said Dragos Doros.

Perhaps the most important change concerns the decision to unify the practice of tax inspectors. ANAF’s President said that at present, work is underway to unify the national practice and develop unique responses to requests for clarification sent to ANAF.