An analysis: What Brexit really means. Both for the EU economy and Britain 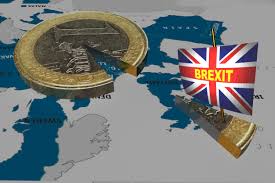 The exit of UK from the European Union, abbreviated Brexit, will cause a decrease of the EU’s GDP of about one-sixth but significantly increase the surplus of the EU trade balance.

Basically, the EU will lose its second-largest economy (Germany exceeds EUR3,000 billion per year), but we should take into account the massive fluctuations of the British pound, which appreciated to record levels two years ago and has been slowing down throughout 2016.

While France showed, also in 2015, only EUR 2,181 billion, let us recall that the situation was substantially different in 2011, with the Hexagon at EUR2,059 billion and the Albion at EUR1,876 billion only.

We should note that the average EU living standard will not change significantly in the absence of the UK. The UK only ranked tenth in 2015 in terms of standard purchasing power parity adjusted GDP / capita, with 109.7% of the EU average and slightly above 106.3%, the level of the Eurozone, recently expanded with several former socialist countries.

Incidentally, there was no case to be otherwise, since the UK’s position in terms labour productivity per employee, with only 34.9 euro/hour worked, is far behind countries like France (46.9 euros/hour) or Germany (42.5 euros/hour). And slightly ahead of the EU average reference, Italy (33.2 euros/hour), or the slightly larger country that caught up, Spain (31.6 euros/hour).

It is certain that without the UK, the EU can no longer (but extremely difficult) aim to the role of the most important player in the global economy. Which it had planned and to which it would have been entitled due to its surface area, population, the level of development and if you wish, the historical tradition. The 1st position that it already held by trade and foreign direct investment, even without having the highest GDP (based on some calculations, it exceeded both the US and China in 2015, by standard parity purchasing power), nor the most important currency used in trading.

EU trade in goods – a relief without Britain

If calculating the foreign trade balance of the Great Britain in 2016, the available data for 11 months indicate a relatively fifty-fifty split of the UK’s trade flows with the EU and non-EU countries. Which shows a lower integration with the EU economy (for reference, Romania operates over three-quarters of the trade with European partners).

In addition, we can see a five percent decrease last year, both in the intra-EU exports and imports. This is where the negative balance of the UK went below the threshold of EUR- 100 billion.

Beware, though, relocating the trade toward the countries outside the EU does not seem to be an action of success either. Despite the devaluation of the British pound, which should have helped the exports and discouraged imports, the negative balance of the British trade has expanded by 36%.

It is noteworthy that on the extra-EU side, the decline in exports was more than triple (-17%), while the imports advanced by eight percent. The result was a real explosion of the trade deficit in relation to the non-EU countries, which increased more than two and a half times compared to the same period of the previous year and rapidly moved closer to the absolute level recorded in the trade with the EU countries.

If recalculating the non-EU segment without the UK, the EU surplus for only 27 countries would increase 5.5 times, to EUR 110.9 billion. If we add the effect of Britain moving to the non-EU category, the current intra-EU deficit of EUR 104.8 billion is added and the EU trade balance goes up to EUR 215.7 billion, or more than ten times higher than in the current Eurostat statistics.

Net contribution to the EU’s finances

Regarding the extensively invoked net contribution of the UK to the EU budget, beyond the data for 2014 that show in simple terms payments of EUR 14 billion and amounts used of about EUR 7 billion, it is worth noting that the situation is quite different than the one publicised during the referendum that led to Brexit. In a comparison with the amounts above or the GDP, the sum of seven billion is not much.

In fact, the UK is the developed Western country that paid the least in respect of its Gross National Product to support the functioning of the EU. The average results for the financial years 2007 – 2013 indicates that the UK had negotiated a special status within the EU, which resulted in the following position: 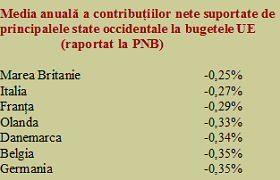 The best part is that a 2016 report by PricewaterhouseCoopers shows that the Brexit’s effect on the British financial services, which employ 4% of the labour force and generate 12% of the budget revenues, will amount to – 2% of the added value of the economy in 2020 and -3.3% in 2030. The year when the effect will be a loss of EUR 8 billion, at the value from 2015. In simple terms, more than the annual cost of the EU membership of EUR 7 billion, mentioned above.

Altogether, although the UK’s exit will significantly weaken the economic strength of the EU, the impact on the British economy is expected to be much tougher. Of course, Britain paid substantial amounts to support the EU budget but has not thought about the costs they will bear after leaving the EU.

In short, Brexit will be an unwanted lose-lose situation, where the UK will be the biggest loser.