The Minister of European Investment and Projects, Cristian Ghinea, states that “PNRR is not Santa’s investment list; it is also a list of assumed reforms… END_OF_DOCUMENT_TOKEN_TO_BE_REPLACED

Luca de Meo (foto), the new general manager (CEO) of Renault group, considers that Dacia project proved to be a miracle and that no one… END_OF_DOCUMENT_TOKEN_TO_BE_REPLACED

A former Soviet airbase in central Romania could become a hub for US Air Force operations in south-eastern Europe, where the Pentagon is seeking to… END_OF_DOCUMENT_TOKEN_TO_BE_REPLACED

Nuclearelectrica’s Board of Directors has been mandated to initiate proceedings to terminate negotiations with China General Nuclear Power Group (CGN), as well as legal effects… END_OF_DOCUMENT_TOKEN_TO_BE_REPLACED

A first step towards regulating the lobby in Romania: Government sets up the Single Register of the Interest Transparency 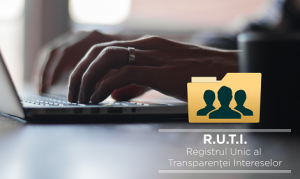 The government approved on Wednesday the creation of the Single Register of the Interest Transparency (RUTI), decision aimed at “increasing the transparency of the interaction between decision makers from the government and specialized groups from civil society and business environment”.

The initiative belongs to the Ministry for Public Consultation and Civic Dialogue (MCPDC) and has resulted in the approval of a memorandum on this theme.

The register will be basically a platform for storing the information (most of them available to the public, some only to the administration) that will be available within 2 weeks at www.ruti.gov.ro.

The mechanism involves an evidence of the interactions (face to face meetings) between decision makers and specialized groups by publishing the agenda of the decision makers from the top of the executive structure or the key information about the groups interested to persuade decision makers to adopt a certain public policy and / or modify an existing one.

The register aims to make known, in a transparent and committed manner, the collaboration between the two parts.

The Government mentions that RUTI does not replace the consultation mechanisms with the public, as they are regulated by Law no. 52/2003 on decisional transparency within the public administration.

The RUTI’s aim, according to the Government, is to increase the quality of public policies initiated by the authorities, but also the new ones that can be taken over from outside the government area.

“The government, following the MCPDC’s proposal, takes a first step in a broader project aiming to establish rules assumed in the interaction between decision makers from the government and the specialist groups from society (from business and NGOs) with the explicit aim to increase, by a transparent and assumed manner, the quality of public policies initiated or taken over by the government. We follow the European and US practices which have proven their positive impact on the quality of decisions regarding the public policy; the other regulations according to which citizens broadly know and comment on draft legislation (Law no. 52/2003) remain mandatory “, says the initiator, Minister Violeta Alexandru.

Mentioned as a preventive measure in the National Anticorruption Strategy 2016-2020 (specific objective 1.1 – Increasing the institutional and decision-making transparency), RUTI addresses civil society groups and businesses that already have activities aimed at persuading decision makers, by an assumed manner and legally, to initiate or modify a policy, but not to weaken the institutions’ efforts to fight corruption, says the Government.

“RUTI invites civil society and business to join the Government’s efforts to increase transparency in public decisions, calling at this first stage of an initiative that will certainly undergo changes in the coming years, on the will and reliability of the parties to enter data. We do not dismiss the option that the mechanism to include in the future other categories, other public institutions or even to have a new legal power”, announces a government statement.

RUTI provisions will enter into force within two weeks from the approval of the memorandum.

Luca de Meo (foto), the new general manager (CEO) of Renault group, considers that Dacia project proved to be a miracle and that no one… END_OF_DOCUMENT_TOKEN_TO_BE_REPLACED

A former Soviet airbase in central Romania could become a hub for US Air Force operations in south-eastern Europe, where the Pentagon is seeking to… END_OF_DOCUMENT_TOKEN_TO_BE_REPLACED

Nuclearelectrica's Board of Directors has been mandated to initiate proceedings to terminate negotiations with China General Nuclear Power Group (CGN), as well as legal effects… END_OF_DOCUMENT_TOKEN_TO_BE_REPLACED

Romania imported an amount of electricity of almost 796 GWh in the first month of this year, by more than 36% above what it exported… END_OF_DOCUMENT_TOKEN_TO_BE_REPLACED

GFG Alliance has committed to invest one billion euros to upgrade Galati steel plant in order to reduce emissions and increase production. Another EUR 1… END_OF_DOCUMENT_TOKEN_TO_BE_REPLACED

The Transport Ministry, as the Intermediate Body in Transport, approved the financing request for the project "Construction of Sibiu - Pitesti highway", Sections 1, 4… END_OF_DOCUMENT_TOKEN_TO_BE_REPLACED

Lack of trust in authorities, corruption and low living standards are the main reasons why young people leave Romania. The data is part of a… END_OF_DOCUMENT_TOKEN_TO_BE_REPLACED

Romania is the EU country with the fewest cars in terms of the number of inhabitants, according to data recently published by Eurostat. We appear… END_OF_DOCUMENT_TOKEN_TO_BE_REPLACED

The Government is preparing the public for the first measures aimed at avoiding the budget slippage, which would be applied by the PSD-ALDE government. News… END_OF_DOCUMENT_TOKEN_TO_BE_REPLACED

French Prosecutor Jean-Francois Bohnert will be appointed as head of the European Financial Prosecutor's Office, a position for which he was heard on Thursday, 11… END_OF_DOCUMENT_TOKEN_TO_BE_REPLACED

Romania recorded the highest road deaths in the EU also last year, with 96 deaths per one million inhabitants in 2018, almost double the EU… END_OF_DOCUMENT_TOKEN_TO_BE_REPLACED

Sorina Pintea announced on Thursday further new changes that will be brought to the functioning of the health care system, including new rules for employment… END_OF_DOCUMENT_TOKEN_TO_BE_REPLACED

The new order on approval and selection procedures for insolvency practitioners is an important step to a very good direction, industry experts say. ANAF is… END_OF_DOCUMENT_TOKEN_TO_BE_REPLACED