Net subscriptions in Romanian mutual funds (the difference between invested and withdrawn amounts) became again positive in 2019 after they had been negative in 2018.… END_OF_DOCUMENT_TOKEN_TO_BE_REPLACED

Romgaz (SNG) announced the start of production in the deep area of Caragele deposit (Buzau), the biggest discovered in the last 30 years and one… END_OF_DOCUMENT_TOKEN_TO_BE_REPLACED

Romania managed again to stand out at the EU level by recording the highest level of the public deficit in the third quarter of 2019,… END_OF_DOCUMENT_TOKEN_TO_BE_REPLACED

According to data provided by INS, in November 2019 Romania recorded a new alarming decrease in monthly industrial production at the level of the negative… END_OF_DOCUMENT_TOKEN_TO_BE_REPLACED

Almost 600,000 Romanian children and young people aged between 0 and 19 years, that is 12.6% of the total Romanian people in this age group,… END_OF_DOCUMENT_TOKEN_TO_BE_REPLACED

The logical, the political, the accounting one – 3 answers to the real budget issue: arbitrary increase of pensions

We made a memory effort and sought to see the budget commitments for the current year.

Taken directly from the source, they look like in the table below, where almost all the points have been reached, with the big exception (explainable because the deadline has not been exceeded) of the pension point increase. 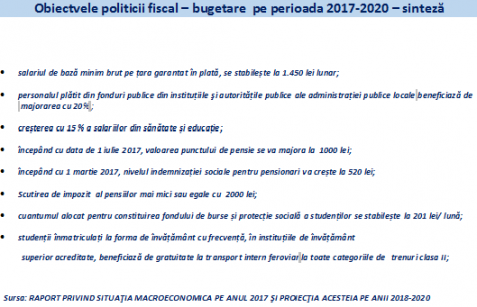 As we can see, there was nothing mentioned in the report on the 2017 budget law, voted in Parliament, about the wage increases for budget employees applied on mid-2017.

The increases committed for the personnel from the public administration, healthcare and education systems seem to already be found in practice if we were to follow the latest INS press release in which the situation is as follows:

Instead, pensioners are rightly expecting a 9% rise in their income as of the middle of the year (from the pension point of 917.50 lei to 1,000 lei, probably because it was a rounded amount and sounded nice during the election campaign) completely arbitrary and outside the amplified legal increase (it is not known why also by rounding it, but upwards), from 4.31% to 5% as of 1 January 2017.

One billion euros per month: and salaries around it

According to the data of the National House of Public Pensions, there were 4,672,795 state pensioners in April who received 4,585,755,643 lei, that is, accidentally about EUR 1 billion per month. This is about the bill for the public budget, with one-third of the expenditure going to pensions and only less than a quarter (for now) to salaries.

If the rule of three is applied, indicatively, for the extra money allocated to pensioners as of mid-year, we obtain about 412.3 million lei a month needed to raise the average pension from 981 lei to 1.069 lei.

That is, a little more than 1,065 lei, the minimum national wage (for which to produce at least 1,783 lei, as required by law, the cost for the employer that generates the publicised and fictitious amount of 1,450 lei). 1,065 lei paid in hand, an amount as net as the 1,069 lei for the tax exempted pensioners (exempted of a tax that should be applied on the income, not its source) for the pensions up to 2,000 lei.

What will that mean for the public budget? For the six months remained for payment by the end of the year, 2.47 billion lei are cumulated, which will increase the public deficit by 0.3% of GDP (as it is known, starting 2007, the money collected from the employees’ contributions to the social security budget is no longer enough to pay pensions and got to cover only about 70% of the necessary amount, which is why the difference must be paid from the state budget).

Or 0.6% of the annual GDP, year after year from now on (in 2018, in 2019, in 2020 and so on) until something will change in the calculation of the pension point, as it is hard to believe that the indexation of pensions (which will include forever the arbitrary increase from 1 July 2017).

The logical, the political and the accounting one: 3 answers to pension increase dilemma

We cannot afford the wage increases for the budget employees because we do not have enough budget revenues (they are somewhere close to a 5% increase around mid-2017 compared to 14%, as hazardously foreseen in the budget law) and yet we can afford to increase pensions, without any relation to the economic performance?

The logical answer is obvious and short: NO.

But the political answer will be long and advantaged by the commitment to apply the already famous Bible of the government program.

The accounting answer taken, according to the official sources, from a CECCAR material (Body of Expert and Licensed Accountants of Romania) looks like in the following chart:

Why should we take the risk of getting so close to the dangerous deficit level of -3% of GDP, a highest risk in 2017 (which explains a lot)? Especially when we had economic growth and could easily maintain the parameters that are increasingly required by the EU hard core for joining the first of the foreseen EU speeds.

And why should we crash the objective of a structural deficit of maximum 1% of GDP (that MTO made famous by the Basescu-Ponta duo, with the very last of them seeming to not understand at that moment what a precious objective for the economic stability has been achieved by his own government) is hard to understand (in the American movies that appears as a “death wish”, meaning unreasonably taking deadly risks).

Especially if we start from the approach that we know our national interest not just our personal pockets. Pockets, in which the happy recipients of the increases applied as of 1 July will still transfer some money from the right to the left pocket (by means of subsidies from the state budget to the social insurance budget) to feel more money in their hands. Let’s also see what real value this money will have in 2018, 2019 or 2020.

Also, who will pay the bill in the future

It seems that they will not be our children, but us, when we must retire, and of course, suddenly, we find that there are no public resources anymore, and anyway, we also are paid a private pension. That is true, a little shrunken (some would even say partly nationalized, to sustain the increase of the current pensions).

We wonder how much would represent 0.9% of the wage, namely the difference between 6%, what it should be according to a law passed by the Parliament, and the 5.1% share that is still paid to the account of this future private pension? Does it count in the arbitrary increase of the current pensions or, in other words, do we still fall within the 3% budget deficit? Next year, when we need extra 0.6% of GDP in expenditure following the adventure of 1 July 2017, what shall we do, shall we keep going like that?

The Transport Ministry, as the Intermediate Body in Transport, approved the financing request for the project "Construction of Sibiu - Pitesti highway", Sections 1, 4… END_OF_DOCUMENT_TOKEN_TO_BE_REPLACED

Lack of trust in authorities, corruption and low living standards are the main reasons why young people leave Romania. The data is part of a… END_OF_DOCUMENT_TOKEN_TO_BE_REPLACED

Romania is the EU country with the fewest cars in terms of the number of inhabitants, according to data recently published by Eurostat. We appear… END_OF_DOCUMENT_TOKEN_TO_BE_REPLACED

The Government is preparing the public for the first measures aimed at avoiding the budget slippage, which would be applied by the PSD-ALDE government. News… END_OF_DOCUMENT_TOKEN_TO_BE_REPLACED

French Prosecutor Jean-Francois Bohnert will be appointed as head of the European Financial Prosecutor's Office, a position for which he was heard on Thursday, 11… END_OF_DOCUMENT_TOKEN_TO_BE_REPLACED

Romania recorded the highest road deaths in the EU also last year, with 96 deaths per one million inhabitants in 2018, almost double the EU… END_OF_DOCUMENT_TOKEN_TO_BE_REPLACED

Sorina Pintea announced on Thursday further new changes that will be brought to the functioning of the health care system, including new rules for employment… END_OF_DOCUMENT_TOKEN_TO_BE_REPLACED

The new order on approval and selection procedures for insolvency practitioners is an important step to a very good direction, industry experts say. ANAF is… END_OF_DOCUMENT_TOKEN_TO_BE_REPLACED

Romania lost to Estonia in the final vote to get the non-permanent member position within the UN Security Council for the period 2020-2021. On Friday,… END_OF_DOCUMENT_TOKEN_TO_BE_REPLACED

eMAG hopes to get the opinion of the Hungarian Competition Council over the next two months for the acquisition of Extreme Digital, the market leader… END_OF_DOCUMENT_TOKEN_TO_BE_REPLACED