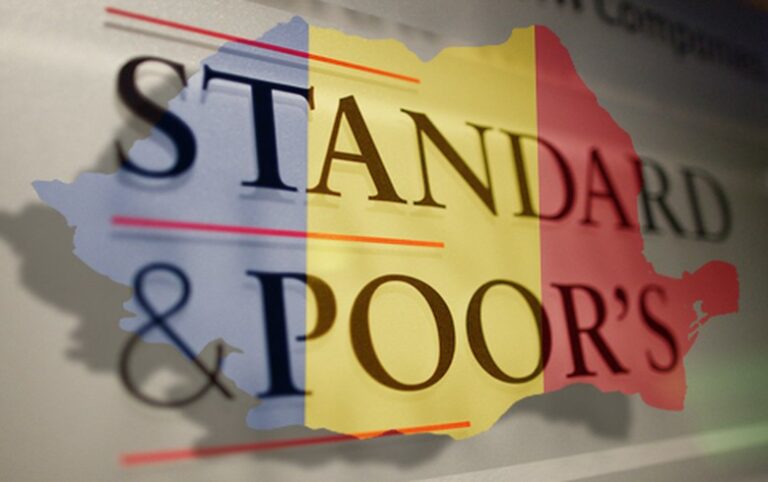 Rating agency Standard & Poor’s has confirmed the ratings for Romania at ‘BBB minus / A-3’ and maintained the negative outlook.

This rating maintains Romania in the range recommended for foreign investments, in the context that prospects of downgrading to „junk” would have been incalculable in terms of financing conditions.

„We believe that Romania’s access to foreign financing and its debt level, still moderate, allow managing the pressure to reduce foreign investment and remittances,” says the S&P Global Ratings report.

Maintaining the rating level, which gives confidence in Romanian bonds, was decided considering „the fiscal consolidation that is expected after general elections in 2020„.

Also, „Romania has the capacity to absorb the (financial) deterioration expected for 2020. (…) We expect a balanced monetary conduct and recognize Romania’s EU membership as an anchor and that is likely to bring the financial support through the extraordinary structural funds which are to be allocated”.

S&P warnings are no less severe than in December when the agency changed its outlook from stable to negative:

The rating agency says it will, however, downgrade Romania’s rating if:

In December, S&P Global Ratings was the first of the rating agencies to revise its outlook on Romania to negative, from stable, maintaining the sovereign credit rating in foreign currency and short-term at „BBB minus / A-3”, after the new government revealed the reality of the budget deficit.

S&P then warned that it would change its rating in the next 24 months if:

The other ratings – at „junk” border, negative outlook

All three major financial rating agencies gave Romania a rating of just one step above the „junk” category and all with negative prospects.

Fitch was the first rating agency that, in the midst of the coronavirus crisis, reanalysed Romania’s capacity to pay the public debt and, although it maintained its rating above the „junk” red line, changed the outlook from stable to negative.

Fitch warned in April that Romania could have a budget deficit of up to 8% of GDP in 2020, above the government’s official forecast of 6.7%. Reducing the deficit in 2021 to 4.2% of GDP would be possible only by reducing or cancelling the 40% increase in pensions and limiting future wage increases.

Moody’s worsened Romania’s rating outlook from „stable” to „negative”, after less than one week, on April 24 and confirmed the long-term rating of „Baa3”, also one step away from the „junk” category, not recommended for investments.