Regression: Economy and companies are less prepared for a crisis than in 2008 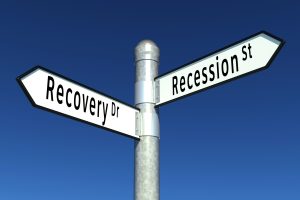 The Romanian economy suffers from the same vulnerabilities as those of 2008 and, in addition, the notable differences are still negative, especially at the level of the companies, according to an analysis published on Tuesday by Iancu Guda, President of the Romanian Financial-Banking Analysts Association (AFABR).

Both the similarities and especially the differences to 2008 raise doubts about the capacity with which „the business environment can better handle a possible international crisis compared to what happened in 2008″, says Iancu Guda in his analysis.

Indeed, Romania’s public debt (calculated according to the EU methodology at the nominal value, excluding the guaranteed debt) was 285.8 billion lei (EUR 63.6 billion) at the end of last year, namely 37.7% of GDP, while in 2008 it was 13.4% (ESA methodology), according to the BNR data.

Unfavourable macroeconomic data is even worse if we add the big differences existing at the level of companies in 2016, which „make us more vulnerable” than in 2008, says Iancu Guda.

The microeconomic picture, as shown by the analysis of the financial statements for financial years 2016 and 2008, reveals „five major differences that make us more vulnerable” than we were 2008, according to the AFABR President: 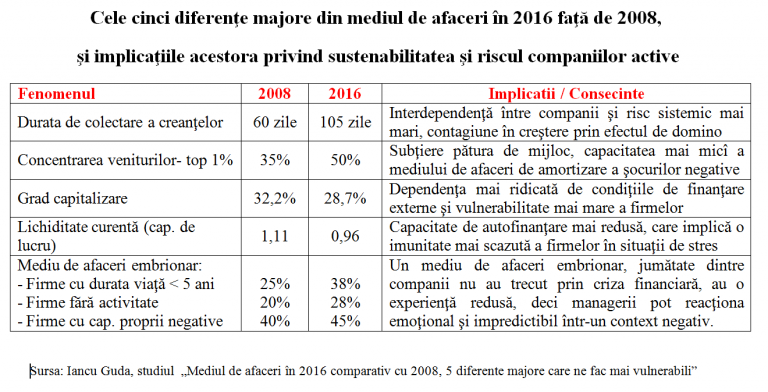 „Delayed payment of an invoice due to temporary liquidity problems or the client’s insolvency will cause a negative shock twice as high to the creditor suppliers.” In other words, „a rock, thrown into the lake (a trigger for an international crisis) will generate twice as high waves,” says the AFABR President.

The sectors with the longest periods for debt collection „which will be the most affected by this phenomenon” are:

Only 1% of the active companies held 58% of the total liquidity of all companies (cash in the cash register and bank accounts) in 2016, compared to 43% in 2008, according to the analysis.

Also, „profits obtained by the business community are more concentrated than ever” by large firms: the largest 1% of companies hold 46% of the total profits earned in 2016, compared to 35% in 2008.

On the contrary and „not by accident, losses are more widespread (their concentration is lower), with the first 1% of companies registering only 26% of the total losses reported by the entire business environment”; 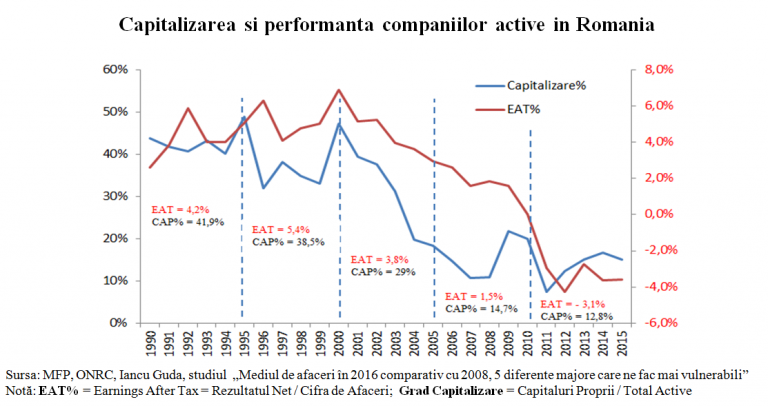 „A decrease in equity ratio implies an increase in the debt ratio, therefore, a higher vulnerability of firms to external financing and the conditions attached to it,” recalls Iancu Guda.

Sectors with an equity ratio below 15% are:

„This phenomenon has been especially amplified in 2016, when profits have been capitalised in dividends of 43 billion lei, representing 85% of the profits obtained in that year, almost all dividends distributed in 2009-2015 and respectively, 10% of the equity of all companies,” remarks the AFABR President in his analysis.

The analyst has not identified „but a single decisive factor driving such a behaviour of accelerated distribution of dividends to shareholders: the dividend tax reduction from 16% to 5% as of January 1, 2016”.

Moreover, „another practice is becoming more common: funding from the affiliated entities.

The share of loans contracted from group companies/shareholders in total debt increased from 11% (2008) to 20% (2016). These amounts can be more quickly withdrawn by shareholders (compared to the situation in which they were injected through the share capital) and are probably secured by fixed assets important/essential to the core business. This also means a more important role of the creditor shareholders at the creditor table, in a possible insolvency of the respective firm,” said the analysis quoted.

„Positive values of the working capital indicate a good potential for self-financing of firms, while negative values point to pressures on liquidity and increasing insolvency risk,” says the analysis.

The working capital is the difference between current assets (the most liquid assets held by companies) and short-term debt (to be reimbursed within one year).

The number of companies that became insolvent between 2008-2016 was 166,000, plus about 850,000 companies that have been deregistered, dissolved or suspended. Nearly one million companies have interrupted their activity in this period – „enormous number, as only 650,000 companies have submitted their financial statements for 2016, out of which almost a quarter do not have any activity anyway), and the average lifetime of an active company in Romania is less than 10 years.

The analysis reveals that a younger and unexperienced business environment in 2016 compared to 2008 is reflected by the following data:

The financing structure and efficiency of the active companies in Romania „seem to be strongly correlated with the experience gained over time”.

In conclusion, we are dealing with a „less capitalised (more indebted), polarized, unexperienced, vulnerable business environment (with a lower self-financing capacity) and more exposed to the contagion effect (domino), to spreading the commercial risk (insolvency of clients). I do not see how such a business environment can better manage a potential international crisis compared to what happened in 2008,” Iancu Guda, President of AFABR, concludes in his analysis.