Net subscriptions in Romanian mutual funds (the difference between invested and withdrawn amounts) became again positive in 2019 after they had been negative in 2018.… END_OF_DOCUMENT_TOKEN_TO_BE_REPLACED

Romgaz (SNG) announced the start of production in the deep area of Caragele deposit (Buzau), the biggest discovered in the last 30 years and one… END_OF_DOCUMENT_TOKEN_TO_BE_REPLACED

Romania managed again to stand out at the EU level by recording the highest level of the public deficit in the third quarter of 2019,… END_OF_DOCUMENT_TOKEN_TO_BE_REPLACED

According to data provided by INS, in November 2019 Romania recorded a new alarming decrease in monthly industrial production at the level of the negative… END_OF_DOCUMENT_TOKEN_TO_BE_REPLACED

Almost 600,000 Romanian children and young people aged between 0 and 19 years, that is 12.6% of the total Romanian people in this age group,… END_OF_DOCUMENT_TOKEN_TO_BE_REPLACED

Financial chaos at Finance Ministry: ANAF prepares to reimburse USD 91 million to WB for a reform of which it only implemented 23.5%: nothing for IT systems, everything for consulting services 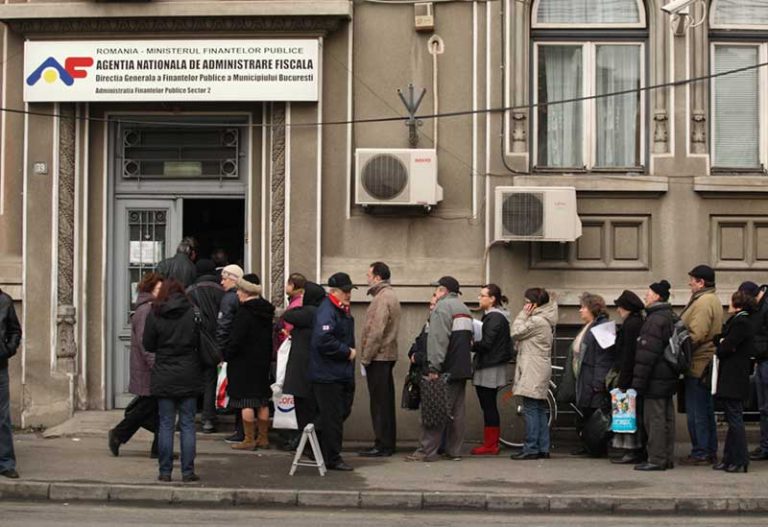 The Romanian taxpayer’s relationship with the tax administration takes place mainly in the street, not in the virtual space

That is what the Minister of Finance, Mr Ionut Misa, says today, January 23, 2018: The National Agency for Fiscal Administration (ANAF) has not spent anything on the IT system following the implementation of the program in collaboration with the World Bank and all the money spent has been allocated to consulting services. The Minister of Finance’s statement was made at the hearings in the Economic Committee of the Senate.

This is not a joke: it is about USD 91 million. And in 2018, the Romanian Government already starts to reimburse the USD91 million loan contracted with the World Bank and the first instalment of 7.1% of the principal amount is to be paid in October.

In summary: we spent a quarter of the money, the ANAF’s IT system sucks and, perfectly normal, Romania starts to reimburse the loan.

And a reality: if a private company did this way with its loan, it would have gone bankrupt, and the administrator would have been arrested for pushing the firm into insolvency.

The situation, word by word, in detail:

“Unfortunately, this program has been implemented to an extent of 23.5%, which means that 23.5% of the allocated funds has been spent but no penny on the IT system. Absolutely all money, equivalent to RON 60 million, was spent on consulting services only. We had discussions with the World Bank representatives from this point of view. They have notified since 2012, every year, that no progress has been made in the IT system and we limited everything to just make analyses and consultation,” Minister Misa said.

It was not a statement on his own initiative but the answer to a question from one of the committee members who was curious to find out the state of implementation of the ANAF modernization project with the World Bank – an institution that not only constantly notified the Romanian authorities that there is something wrong with this project, but even decided to extend the program for two years, hoping that maybe Romania will do something for the computerization of the system at the European standards.

Out of the nine ministers in charge, eight were from PSD and ALDE

Who are those who, since 2012, mimicked the interest for the reorganization and efficiency? First, the heads of the fiscal administration:

Then, those who are officially chiefs of the heads of the fiscal administration – the finance ministers:

The last on the list, Ionut Misa, explained to the committee that he tried something, though:

“We had talks with them (World Bank representatives – editor’s note) about the possibility to continue with this formula and, by agreement, we have created the National Fiscal Information Centre. They considered it is a good idea to centralize all ANAF databases and gather the whole IT system under a single umbrella.

There were 322 different databases, many of them written in different programming languages, and it was necessary to unify the whole IT system under one umbrella with a vision and strategy on the IT system for the next period, both on the hardware support, which is obsolete and ANAF made no acquisitions since 2005 from this point of view, as well as on the IT support. We want to avoid any movement of a taxpayer to any other institution that may need such information,” said Minister Ionut Misa.

The statement raises though some problems:

Translated into common language, the last point means that everything implemented so far will be made again.

And that raises the following question: Who is held responsible for the “23.5%” share representing the money spent – more precisely borrowed from the World Bank – without any practical use?

Important mention: The World Bank – ANAF partnership project costs USD 91 million as a loan. And the loan, according to the initial contract, is to be reimbursed between 2018 and 2025.

The Romanian authorities will pay two instalments per year of 7.1% of the principal amount, starting October 2018 and the last payment will be made in April 2025, according to a contract signed in May 2013 by the Romanian Government and the World Bank officials.

cursdeguvernare.ro has been monitoring all during these years the failures of the Ministry of Finance in the digitization and computerization of ANA in line with the standards of a European state and the expectations of the business environment and taxpayers.

Below, you can read the headlines of the signal articles, which failed to make any government react to this situation.

The Transport Ministry, as the Intermediate Body in Transport, approved the financing request for the project "Construction of Sibiu - Pitesti highway", Sections 1, 4… END_OF_DOCUMENT_TOKEN_TO_BE_REPLACED

Lack of trust in authorities, corruption and low living standards are the main reasons why young people leave Romania. The data is part of a… END_OF_DOCUMENT_TOKEN_TO_BE_REPLACED

Romania is the EU country with the fewest cars in terms of the number of inhabitants, according to data recently published by Eurostat. We appear… END_OF_DOCUMENT_TOKEN_TO_BE_REPLACED

The Government is preparing the public for the first measures aimed at avoiding the budget slippage, which would be applied by the PSD-ALDE government. News… END_OF_DOCUMENT_TOKEN_TO_BE_REPLACED

French Prosecutor Jean-Francois Bohnert will be appointed as head of the European Financial Prosecutor's Office, a position for which he was heard on Thursday, 11… END_OF_DOCUMENT_TOKEN_TO_BE_REPLACED

Romania recorded the highest road deaths in the EU also last year, with 96 deaths per one million inhabitants in 2018, almost double the EU… END_OF_DOCUMENT_TOKEN_TO_BE_REPLACED

Sorina Pintea announced on Thursday further new changes that will be brought to the functioning of the health care system, including new rules for employment… END_OF_DOCUMENT_TOKEN_TO_BE_REPLACED

The new order on approval and selection procedures for insolvency practitioners is an important step to a very good direction, industry experts say. ANAF is… END_OF_DOCUMENT_TOKEN_TO_BE_REPLACED

Romania lost to Estonia in the final vote to get the non-permanent member position within the UN Security Council for the period 2020-2021. On Friday,… END_OF_DOCUMENT_TOKEN_TO_BE_REPLACED

eMAG hopes to get the opinion of the Hungarian Competition Council over the next two months for the acquisition of Extreme Digital, the market leader… END_OF_DOCUMENT_TOKEN_TO_BE_REPLACED