According to the data communicated by the NIS, in January 2020, Romania registered a new decrease in monthly industrial production, by -2.4% in gross series… END_OF_DOCUMENT_TOKEN_TO_BE_REPLACED

Dacia-Renault presented its “show car” Dacia Spring, “which prefigures the first 100% electric model of this brand” and will enter series production in 2021, according… END_OF_DOCUMENT_TOKEN_TO_BE_REPLACED

With current data and based on the legislation already adopted, Romania’s public debt is forecasted to reach 91.2% of GDP, according to the analysis of… END_OF_DOCUMENT_TOKEN_TO_BE_REPLACED

The progress in the development of Romanian infrastructure networks of utilities and roads is too slow compared to the needs and our neighbours’ progress, as… END_OF_DOCUMENT_TOKEN_TO_BE_REPLACED

Continuing quantitative easing: how justified is it? (III) 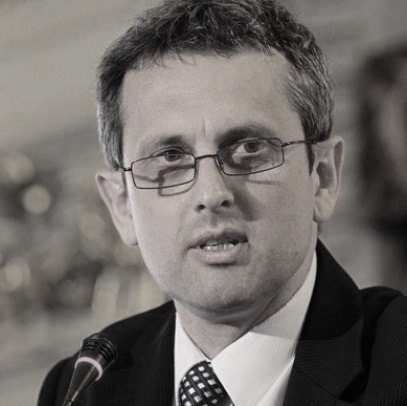 In this last article from the series devoted to the analysis of the quantitative easing performed by the European Central Bank (ECB), we will deal with the two arguments which are not openly stated, but could well be seen as justifying the relaxation:
the need to stimulate Euro Area’s exports through a depreciation of the currency, and the over-indebtedness of states, firms and households.

Continuing the reduction of interest rates, well into negative territory, might be perceived as an attempt to depreciate the euro vis-à-vis other currencies and to give an impetus to Euro Area’s exports. This approach can be countered by several arguments: first, the ECB does not have in its statute the objective of stimulating exports. Second, export stimulus is only a component of promoting growth irrespective of the economic cycle, which – as shown in the previous article – is fraught with big problems. Third (and most importantly), the Euro Area represents, for a long time, the economic entity having the largest current account surplus (incomes from exports and dividends that are greater than expenditures with imports and remittances): almost 390 billion USD in 2018. In comparison, the USA have a current account deficit of circa 470 billion USD, while China has a surplus of “only” 170 billion USD. One can see how an attempt by the Euro Area to enhance its external surplus would only poison the trans-Atlantic relations, offering the mercantilist American administration a new reason to amplify the trade war.

If for the Euro Area as a whole an additional stimulus for the exports seems un-necessary and even harmful, let us analyze whether this conclusion holds as well for the member states taken individually. Table 2 shows that, indeed, the external position of these states differs significantly. 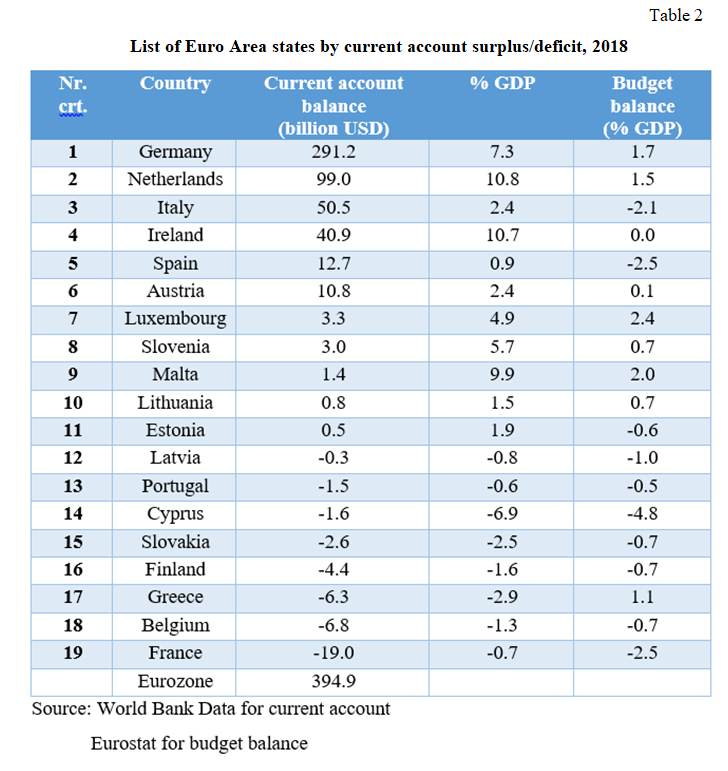 Referring to another facet of the problem, namely what could replace exports as a determinant of economic growth, one can see that the majority of states enjoy some fiscal space (budgetary surpluses or small deficits) that can be used to stimulate growth. But the fact that Germany, despite its budgetary surplus, prefers not to use it to stimulate growth – and accepts entering a recession – is reflecting, maybe, the understanding of economic cycle’s inevitability, referred to in the previous article. In other words, there is no point for a state to weaken its budgetary position in order to forestall a recession, which is a natural economic phenomenon and which will occur anyway, sooner or later.

In conclusion, additionally stimulating exports cannot represent a valid argument for quantitative easing, neither for the Euro Area as a whole, nor the states taken individually.

4- Over-indebtedness of some countries, firms and households

Low interest rates represent a life jacket thrown at the debtors. And they are more and more numerous in the modern society, not only in developed countries, but also in emerging ones. Until mid-twentieth century it was considered shameful, for instance, for an American worker to be indebted. Later, due to aggressive marketing and psychological pressure exercised through advertising, more and more employees started to live on debt. Nowadays, in the developed economies, one is regarded as a freak if he/she does not have a credit, a reversal of 180 degrees of the situation prevailing 70 years ago. 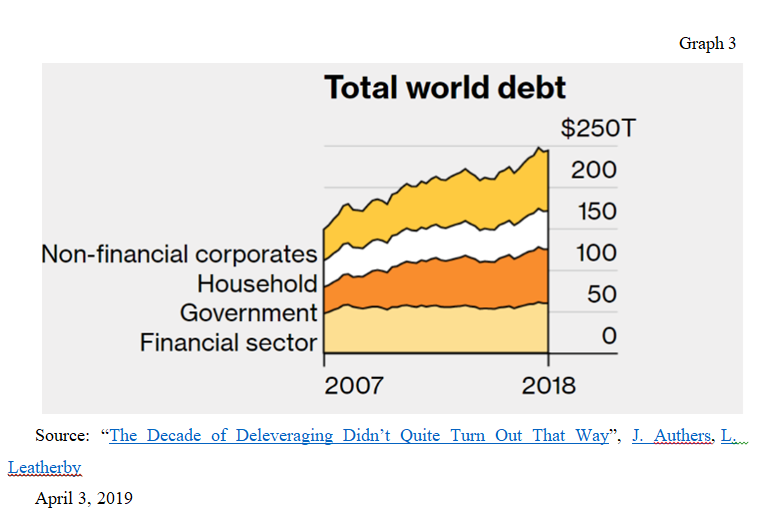 As a matter of fact, a low interest rate is helping the debtors in two complementary ways: on the one hand, it keeps the debt at a lower level (than in the case of a higher interest rate that would cover inflation); on the other hand, it artificially inflates the price of detained assets (stock shares, houses, etc.). Thus, the difference between assets and liabilities, called net worth, grows in an artificial way in an environment with low interest rates, making economic agents feel wealthier than they are in reality. Inducing this perception was sought from the beginning by QE’s promoters, in the hope that optimism stimulated this way would give a new impulse to economic activity. Only that impulse has not yet come, while economic agents have grown accustomed to live in a virtual reality.

When, inevitably, interest rates will increase to a normal level, a series of economic agents will discover that they have, in reality, a negative net worth (debts surpassing their assets), and the more this hour of reckoning is postponed, the tougher the wake up will be.

Interestingly, net worth at the aggregate level (governments plus households, firms and financial institutions) is not so worrisome, because wealth accumulated through centuries, net of debt, is very large and would remain positive even despite a significant increase of interest rates. Table 3 shows that Euro Area states (highlighted in yellow) have net worth situated between one to five national GDPs. For instance, in France, the net worth accumulated throughout history is sufficient to cover 5 years in which no GDP would be produced (or there would be no income from salaries, bonuses, pensions, dividends, interest, rents, capital gains etc.) 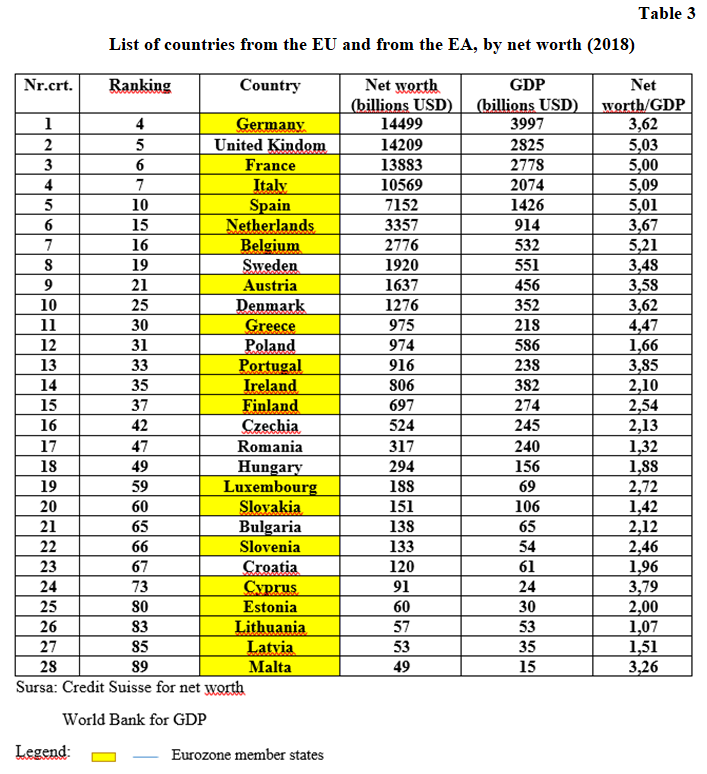 Then, if at the level of each nation, the net worth would be more than sufficient to withstand any interest rate increase (or debt increase), where does the resistance to a hike in interest rates stem from? Probably, in the fear that some firms and some households would suddenly discovery they have negative net worth. In other words, the ECB would postpone the process of interest rate normalization out of fear that some economic agents, with less foresight, might face bankruptcy (and, eventually, take to the street in mass protests).

But such an approach would mean the denial of the very “creative destruction” which sits at the basis of capitalism and which presupposes that the less diligent are evicted by the market and their assets are redistributed to other economic actors. In other words, another denial of market economy principles, out of fear for political repercussions.

Thus, neither this motivation for maintaining a low level of interest rates does withstand economic scrutiny.

In conclusion, out of the four possible reasons for continuing quantitative easing, only one (inflation rate below target) is endorsed both by statutes and by economic logic, however debatable it might be. The other three reasons do not withstand analysis, neither from the viewpoint of ECB’s statute, nor from that of economic logic.

Continuing quantitative easing: how justified is it? (I)

Romania imported an amount of electricity of almost 796 GWh in the first month of this year, by more than 36% above what it exported… END_OF_DOCUMENT_TOKEN_TO_BE_REPLACED

GFG Alliance has committed to invest one billion euros to upgrade Galati steel plant in order to reduce emissions and increase production. Another EUR 1… END_OF_DOCUMENT_TOKEN_TO_BE_REPLACED

The Transport Ministry, as the Intermediate Body in Transport, approved the financing request for the project "Construction of Sibiu - Pitesti highway", Sections 1, 4… END_OF_DOCUMENT_TOKEN_TO_BE_REPLACED

Lack of trust in authorities, corruption and low living standards are the main reasons why young people leave Romania. The data is part of a… END_OF_DOCUMENT_TOKEN_TO_BE_REPLACED

Romania is the EU country with the fewest cars in terms of the number of inhabitants, according to data recently published by Eurostat. We appear… END_OF_DOCUMENT_TOKEN_TO_BE_REPLACED

The Government is preparing the public for the first measures aimed at avoiding the budget slippage, which would be applied by the PSD-ALDE government. News… END_OF_DOCUMENT_TOKEN_TO_BE_REPLACED

French Prosecutor Jean-Francois Bohnert will be appointed as head of the European Financial Prosecutor's Office, a position for which he was heard on Thursday, 11… END_OF_DOCUMENT_TOKEN_TO_BE_REPLACED

Romania recorded the highest road deaths in the EU also last year, with 96 deaths per one million inhabitants in 2018, almost double the EU… END_OF_DOCUMENT_TOKEN_TO_BE_REPLACED

Sorina Pintea announced on Thursday further new changes that will be brought to the functioning of the health care system, including new rules for employment… END_OF_DOCUMENT_TOKEN_TO_BE_REPLACED

The new order on approval and selection procedures for insolvency practitioners is an important step to a very good direction, industry experts say. ANAF is… END_OF_DOCUMENT_TOKEN_TO_BE_REPLACED

Romania lost to Estonia in the final vote to get the non-permanent member position within the UN Security Council for the period 2020-2021. On Friday,… END_OF_DOCUMENT_TOKEN_TO_BE_REPLACED

eMAG hopes to get the opinion of the Hungarian Competition Council over the next two months for the acquisition of Extreme Digital, the market leader… END_OF_DOCUMENT_TOKEN_TO_BE_REPLACED