Romania fell 3 places to the 10th position in the ranking of largest investments made by the European Bank for Reconstruction and Development (EBRD), after… END_OF_DOCUMENT_TOKEN_TO_BE_REPLACED

The Transport Ministry, as the Intermediate Body in Transport, approved the financing request for the project “Construction of Sibiu – Pitesti highway”, Sections 1, 4… END_OF_DOCUMENT_TOKEN_TO_BE_REPLACED

Lack of trust in authorities, corruption and low living standards are the main reasons why young people leave Romania. The data is part of a… END_OF_DOCUMENT_TOKEN_TO_BE_REPLACED

Romania imported 38% more electricity in the first five months of this year, compared to the same period of 2018, according to the most recent… END_OF_DOCUMENT_TOKEN_TO_BE_REPLACED 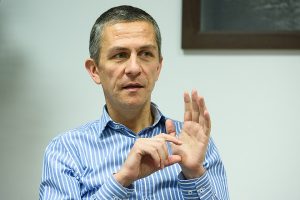 eMAG hopes to get the opinion of the Hungarian Competition Council over the next two months for the acquisition of Extreme Digital, the market leader in the neighbour state.

Once the merger gets on the home straight, five new markets will open to the Romanian retailer, on which it plans to develop through the marketplace platform, an important driver for local sales.

“With this merger, we will develop ourselves in other countries where they are present, so besides the four markets where we are now active, we add Croatia, Slovenia, Austria, the Czech Republic and Slovakia. (…) In the five new markets, the development will be made mainly through the marketplace,” said Iulian Stanciu (photo), CEO of eMAG, at a press conference on Wednesday.

eMAG announced the acquisition of Extreme Digital at the end of March, and now the company aims to reach one billion euros in Hungary in the next six years.

The Hungarian market equals 70-75% of the Romanian one, as the population is twice as low. Consumption per capita is higher than at the local level. Once integrated, the new company, eMAG, currently present on the Romanian, Bulgarian, Hungarian and Polish markets, plans to continue its regional development.

“The expansion will be made from Hungary. The technology will be the one of eMAG, people will be trained by eMAG. The branding part will be discussed and we will announce it later. At the moment, we do not have the agreement of the Hungarian Competition Council yet, so we expect to have the agreement to talk about the merger. We hope to have this agreement within two months. Sometime in the next spring, we will do the whole merger,” Stanciu explained.

In 2018, eMag group had a turnover of RON 4.77 billion, up 17.5% over the previous year. In Romania, the turnover was RON 3.77 billion and the local market is the only one that brings profit, which is entirely reinvested.

The Marketplace Platform has substantially contributed to business growth. At present, there are 5.7 million products listed, compared to 10,000 in 2011. Stanciu believes there is room for growth in the context that the largest retailer in France has a portfolio of products available of 65 million.

Quantitatively, Marketplace contributed more than half of the group’s total sales, and in value terms, they accounted for 32% of the sales value (the average value of products sold by sellers is slightly below those sold directly by eMag).

In 2018, eMAG group increased its customer base by 1.9 million, of which almost one million only in Romania.

Surprisingly, out of this million, half comes from rural areas.

Over the next five years, eMAG plans to invest EUR 150 million in technology.

The Transport Ministry, as the Intermediate Body in Transport, approved the financing request for the project "Construction of Sibiu - Pitesti highway", Sections 1, 4… END_OF_DOCUMENT_TOKEN_TO_BE_REPLACED

Lack of trust in authorities, corruption and low living standards are the main reasons why young people leave Romania. The data is part of a… END_OF_DOCUMENT_TOKEN_TO_BE_REPLACED

Romania is the EU country with the fewest cars in terms of the number of inhabitants, according to data recently published by Eurostat. We appear… END_OF_DOCUMENT_TOKEN_TO_BE_REPLACED

The Government is preparing the public for the first measures aimed at avoiding the budget slippage, which would be applied by the PSD-ALDE government. News… END_OF_DOCUMENT_TOKEN_TO_BE_REPLACED

French Prosecutor Jean-Francois Bohnert will be appointed as head of the European Financial Prosecutor's Office, a position for which he was heard on Thursday, 11… END_OF_DOCUMENT_TOKEN_TO_BE_REPLACED

Romania recorded the highest road deaths in the EU also last year, with 96 deaths per one million inhabitants in 2018, almost double the EU… END_OF_DOCUMENT_TOKEN_TO_BE_REPLACED

Sorina Pintea announced on Thursday further new changes that will be brought to the functioning of the health care system, including new rules for employment… END_OF_DOCUMENT_TOKEN_TO_BE_REPLACED

The new order on approval and selection procedures for insolvency practitioners is an important step to a very good direction, industry experts say. ANAF is… END_OF_DOCUMENT_TOKEN_TO_BE_REPLACED

Romania lost to Estonia in the final vote to get the non-permanent member position within the UN Security Council for the period 2020-2021. On Friday,… END_OF_DOCUMENT_TOKEN_TO_BE_REPLACED

eMAG hopes to get the opinion of the Hungarian Competition Council over the next two months for the acquisition of Extreme Digital, the market leader… END_OF_DOCUMENT_TOKEN_TO_BE_REPLACED