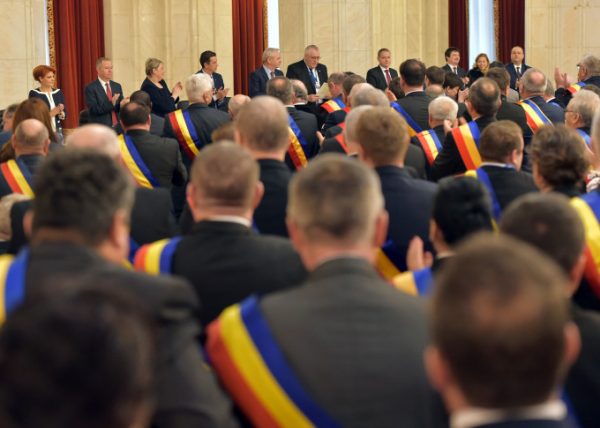 The Chamber of Deputies votes the amendments to Romania’s Administrative Code on Monday, amendments that strengthen the political control over local administrations.

It is expected that, despite the problems raised, the amendments will be adopted by a large majority in the Parliament, as only USR and PMP announced they do not support the changes made by the majority coalition.

Power assured that it can count on UDMR’s votes:

the 20% threshold for allowing the use of the native language of national minorities in the local government is now just for guidance. Art. 94 (2) provides: „Public authorities and institutions, as well as the other legal entities stipulated in paragraph 1 (which sets the threshold of at least 20% – editor’s note), by a decision of their deliberative bodies or, where applicable, the management structures may decide to ensure the use of the national minorities’ language in the administrative-territorial units where citizens from national minorities do not reach the proportion mentioned in paragraph 1″.

Even though not explicitly stated, UDMR considers that the same logic can be applied to bilingual signs.

PNL did not officially communicate its position for the vote, but there is the statement made by Deputy Florin Roman (PNL), chairman of the Administration Committee, who said last week in the plenary: „We cannot throw away a whole bill because of two articles”.

Timisoara Mayor, Nicolae Robu, has a similarly position. He wrote on Friday, on Facebook: „Dear Ludovic, give PNL lawmakers the mandate to vote for the new administrative code! It is not perfect, obviously – is it something perfect in this world?! -, but it is an important step forward in the legislation on public administration!”

Everything for the bureaucratic apparatus, as little as possible for citizens

Mayors do no longer assume the responsibility for their decisions, which is placed on directors’ shoulders, and employees from the mayor’s office will be at the disposal of the mayor, following the diminished role of the National Agency of Civil Servants.

The requirement to have an opinion from the unit secretary on the legality of local councils’ decisions has been removed – art. 136, line 3, par. b.

Assets of local communities will be much easier to dissipate, as just a simple majority is now required for decisions, and the transparency of normative acts is questioned after the amendments regarding the public character of committee meetings in local and county councils have been rejected.

One of the new provisions of the Administrative Code is that mayors, vice-mayors, presidents and vice-presidents of county councils elected after 1992 will receive a special pension within the limits of three mandates.

„Persons elected starting 1992 by citizens, by universal suffrage, by equal, direct, secret vote, respectively indirectly and freely expressed vote, namely the mayors, vice- mayors, presidents and vice-presidents of county councils, who meet requirements for standard retirement age, standard age for reduced retirement as provided by Law 263/2010 on the unitary public pension system, as amended and supplemented, or those provided for in other special laws, are entitled, upon the termination of the mandate, to an old-age allowance at the time when the old-age pension rights are granted, but not earlier than the termination of the current mandate„, provides the normative act.

Another amendment allows local elected representatives to have the self-employed status or the status of a person operating an individual enterprise or a family enterprise.

Also, the amount of the old-age allowance provided in par. 1 is granted within the limit of three mandates and is calculated by multiplying the number of months of the mandate with 0.40% of the monthly gross allowance currently paid.

At the same time, for incomplete mandates, the old-age allowance is calculated in proportion to the effective term of office, but not less than a full mandate of mayor, vice- mayor, president and vice-president of county councils.

The new code also solves certain incompatibility issues, with art. 132 stating: „Communes, cities and municipalities are by law represented by mayors in general assemblies of intercommunity development associations and in general assemblies of regional and local operators. Mayors may delegate their capacity as representatives of the administrative-territorial units in the general assemblies to vice- mayors, public administrators, as well as any other persons from mayor’s specialized apparatus or from a public institution of local interest.

To all these, we should add the amendments related to the Court of Auditors’ roles. The institution will no longer have the same authority over the administration during inspections; the power of the Court gathers in just one hand, the notification of the prosecutors in case of illegalities is now only made by decision of the President of the Court of Auditors, who gets discretionary powers.