7%: Groups of companies resident in Romania and external/internal control of economy 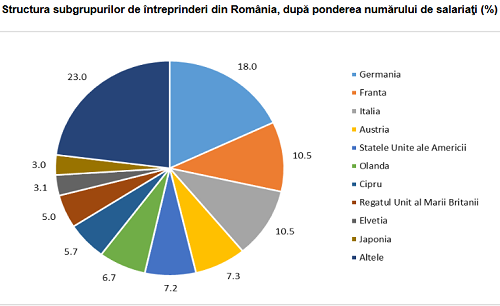 Most of the resident groups of companies operate predominantly in the following sections: G – Wholesale and retail trade; repair of motor vehicles and motorcycles – where they represent only 20%, S – Other service activities – 17%, M – Professional, scientific and technical activities – 12%, C – Manufacturing – 10% and F – Construction – 10%.

If these percentages are applied to those that these sections have in the whole groups, we obtain rates around 7% only in the trade and repair field and almost reach the psychological threshold of 1% in three areas: Manufacturing, Construction and Professional, scientific and technical activities.

That shows a marginal presence of the domestic capital and a strong concentration, on the foreign side, of the decisions made in the economy, let’s call it Romanian for geographical and workforce related reasons. Of course, there are also numerous small enterprises which are not part of any group and belong, most of them, to the Romanians. But that is not where important decisions are taken.

So, without us lamenting and wondering about the advance of globalization and the openness offered by the unification of markets within the EU (we can easily notice that the three countries with the most important shares in the economy are also the largest trade partners), maybe we should calibrate more carefully our government policies.

We should also distinguish between Romania’s economy, predominantly controlled from abroad, and the economy of Romanians (by place of residence), with most of the companies (by number) being local ones.

Legal entity means any economic or social operator that has its own patrimony, can conclude contracts in his own name with third parties and defend its interests in court – has legal personality. Legal entities are either authorized natural persons, individual enterprises, family businesses (in their capacity as entrepreneurs) or legal entities.

Control – a legal entity is controlled if another legal entity holds a share exceeding strictly 50% in the decision-making process from the general meeting of the shareholders, or which, by contract, has the right to control.

Group head – a legal entity, neither directly, nor indirectly controlled by any other legal entity and controlling at least one subsidiary

Resident group – a group of enterprises whose legal entities (businesses) are all resident in the same country.