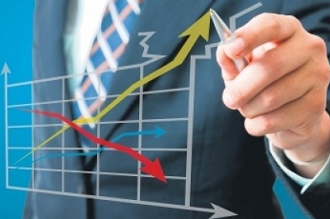 The growth of the Romanian economy over the last decade has been impressive in nominal value, above all other EU states.

But it has a big congenital problem: over the last 10 years, Romania has gained less than Poland did from lower but much more stable growth rates.

The average annual growth rate in the last 10 years was 2.5% in Romania and 3.3% in Poland, according to Eurostat data, in current prices and national currencies.

The economic growth evolution illustrates the wide range of variations in Romania’s case, with distant extremes, while Polish increases had lower extremes but only positive values. 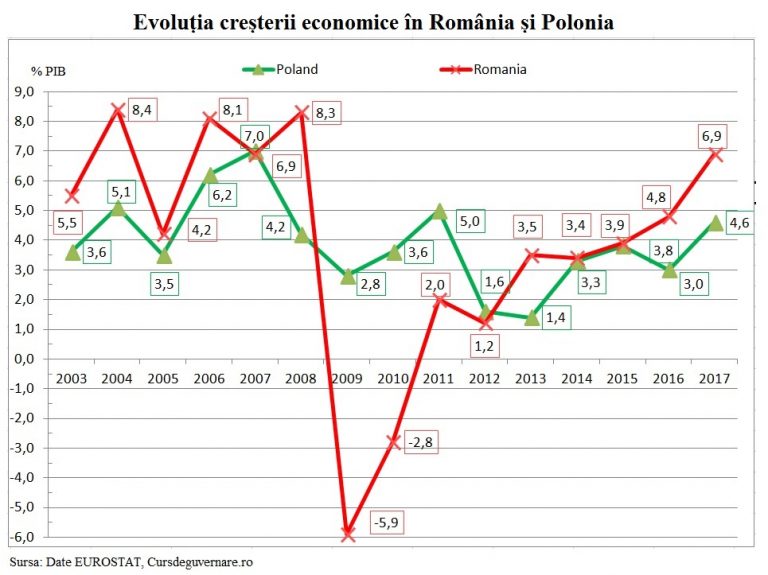 Increase “from wages” versus sustainable growth

Romania’s GDP grew by 8.3% in 2008 based on the unsustainable consumption growth resulted from wage increases.

Also in 2017, the 6.9% increase was almost exclusively the result of earlier wage increases, as well as a fiscal loosening that encouraged consumption.

The negative correction of the rhythm in 2018 will again be deep in Romania (down to almost half compared to 2017 – analysts say).

At the same time, Poland will increase its growth rate (from 4.6% to 4.9, according to Erste Group Research).

Differences in the quality of growth are added to statistical differences and Romania’s growth seriously affect the chances of progress in the future.

In 2009, Poland’s strengths were the stable and developed domestic market and the ability of decision-makers to control imbalances, according to the IMF.

Instead, Romania’s economy collapsed, unbalanced by the effects of massive imports that fuelled consumption.

Then Romania had to cut wages and increase VAT, while Poland knew how to use European funds to maintain growth during the crisis within the positive range and could cut income tax and stimulate consumption at the right time.

In 2017 the two economies were stimulated by consumption, but again with proportions that have damaged the balances in Romania, respectively preserved balances in Poland.

The budget deficit was 1.7% of GDP in Poland last year, while the Romanian Government barely managed to maintain it at 2.9% (one step below the EU’s maximum accepted level).

The evolution of the construction sector is negative in Romania and positive in Poland.

In Poland, „the sharp decline in investment was almost entirely offset by the acceleration of exports,” says a Capital Economics report issued on Tuesday.

Instead, the Romanian economy continued to slow down its growth rate (4.2%) after a previous rhythm collapse.

In Romania, not only are investments decreasing, but net exports are negative.

In Poland, wage increase will also trigger the increase in inflation, but it tends towards capping (2.0% in August, after 1.9% in July).