The transition to a green economy needs to be supported by new, additional European funds, distinct from Romania’s allocations from the future EU multiannual budget.… END_OF_DOCUMENT_TOKEN_TO_BE_REPLACED

Romania fell 3 places to the 10th position in the ranking of largest investments made by the European Bank for Reconstruction and Development (EBRD), after… END_OF_DOCUMENT_TOKEN_TO_BE_REPLACED

The Transport Ministry, as the Intermediate Body in Transport, approved the financing request for the project “Construction of Sibiu – Pitesti highway”, Sections 1, 4… END_OF_DOCUMENT_TOKEN_TO_BE_REPLACED

Lack of trust in authorities, corruption and low living standards are the main reasons why young people leave Romania. The data is part of a… END_OF_DOCUMENT_TOKEN_TO_BE_REPLACED

ANAF initiated actions in banks: they target transfers of bad loans. ANAF Director: “We found many things having major consequences” 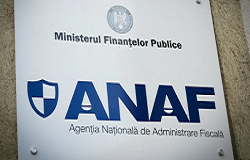 The National Agency for Fiscal Administration (ANAF) started a series of inspections in banks, has already identified “many things” and “there are major consequences,” said on Friday the general director of the Directorate general for the administration of large taxpayers, Ionut Misa, in a specialized conference.

“We are currently analyzing and have controls in progress in the banking sector. I cannot reveal what state is today and what is happening there, but I can tell that there are major consequences and we have identified many things.

I can give an example. I give you the example of the loan portfolios sold. Banks have come up with the idea that, to redeem a nonperforming loan, they should integrate it into a package with performing loans and create a package as attractive as possible to a potential investor.

They sold this way credit packages worth EUR 100 million, an easy amount for the transactions operated at yields of 5-7%.

They sold a EUR 100 million worth package to a company for EUR 5-7 million. The difference of EUR 95-93 million would be deductible expense. There were losses, which means diminished profits,” said Misa, quoted by Agerpres.

The company to whom the loan portfolio was sold was a bank’s subsidiary with offices at an offshore location:

“The company was sold to the subsidiary company. Basically, the bank was 100% shareholder in the company, which had offices in the offshore.

There are cases where it is proven that the respective loan has been used in a fraudulent circuit and, moreover, without complying with the bank’s own rules which granted the loan.

The bank gave a loan inconsistent with its own rules and, moreover, it is proven in court by final decision that it entered an evasion circuit.

Nonetheless, as the bank has not recovered that loan, the cost resulted from the loan is considered deductible expense.

Once again, the cost is subtracted from the (tax – editor’s note) on the profit that should have been paid in Romania.

We can do nothing. If the legislature does not make strides in this regard, we are completely exposed in front of companies benefiting from a more extensive capitalist experience than ours, which benefit from the support offered by consulting firms and very good accountants, who know how to take advantage of the law very well, how to create fiscal tricks hard to identify and financial circuits difficult to stop.

We must prepare ourselves if we want to stop and counteract these things.” pointed out the head of ANAF’s Directorate general for the administration of large taxpayers.

The Transport Ministry, as the Intermediate Body in Transport, approved the financing request for the project "Construction of Sibiu - Pitesti highway", Sections 1, 4… END_OF_DOCUMENT_TOKEN_TO_BE_REPLACED

Lack of trust in authorities, corruption and low living standards are the main reasons why young people leave Romania. The data is part of a… END_OF_DOCUMENT_TOKEN_TO_BE_REPLACED

Romania is the EU country with the fewest cars in terms of the number of inhabitants, according to data recently published by Eurostat. We appear… END_OF_DOCUMENT_TOKEN_TO_BE_REPLACED

The Government is preparing the public for the first measures aimed at avoiding the budget slippage, which would be applied by the PSD-ALDE government. News… END_OF_DOCUMENT_TOKEN_TO_BE_REPLACED

French Prosecutor Jean-Francois Bohnert will be appointed as head of the European Financial Prosecutor's Office, a position for which he was heard on Thursday, 11… END_OF_DOCUMENT_TOKEN_TO_BE_REPLACED

Romania recorded the highest road deaths in the EU also last year, with 96 deaths per one million inhabitants in 2018, almost double the EU… END_OF_DOCUMENT_TOKEN_TO_BE_REPLACED

Sorina Pintea announced on Thursday further new changes that will be brought to the functioning of the health care system, including new rules for employment… END_OF_DOCUMENT_TOKEN_TO_BE_REPLACED

The new order on approval and selection procedures for insolvency practitioners is an important step to a very good direction, industry experts say. ANAF is… END_OF_DOCUMENT_TOKEN_TO_BE_REPLACED

Romania lost to Estonia in the final vote to get the non-permanent member position within the UN Security Council for the period 2020-2021. On Friday,… END_OF_DOCUMENT_TOKEN_TO_BE_REPLACED

eMAG hopes to get the opinion of the Hungarian Competition Council over the next two months for the acquisition of Extreme Digital, the market leader… END_OF_DOCUMENT_TOKEN_TO_BE_REPLACED